When I get to meet with casts who perform May I Have Your Attention, Please? they often have questions about the inspiration for writing it, the writing process and the most frequently asked question, “How does the videotape get to Charlie.” My inspiration for the play was my own students. It was a new drama program with zero budget to purchase scripts, pay royalties etc so I just custom wrote a play to fit the students I had in class. Having a special needs student who I wanted to make sure was included, gave me the character of Charlie. As to how the videotape arrives if Chris is dead, I always just say that it’s my hope he is alive and it all is a practical joke but many options exist and I have felt it best to let the audience draw their own conclusion.

A few fun facts about the play that you would not know until now…..Christopher’s birthday is April 1st. I used that because it is also my mom’s birthday. Brent’s is November 10th which happens to be my birthday 🙂 Nearly all cast members can recite their “abc’s” forwards and backwards after being a part of this play. The back story for this is that when my mom was young, her Dad told her he wanted her to learn her abc’s from a chalkboard he had left by the time he came home from work. She didn’t know which way was the beginning so she learned them both ways. She was very young but also very smart and now that trait is one passed on to the character of Chris. You never know what story from your own life will be an inspiration for a character to another writer. So now you have…. the rest of the story 🙂   #Theatre4Change

Proud to say, May I Have Your Attention, Please will soon be performed in another Canadian Province. Thanks, Newfoundland for spreading the message!  #Theatre4Change

Who would have thought growing up that plays I wrote would be performed in 25 states, 3 Canadian Provinces and Scotland? I thought a performance in my classroom with my first drama kids was a big deal and never fathomed that the messages I wanted to share in my writing could reach beyond those walls. I am thankful to all those who choose my works each year to spread the messages in their own way. Here’s hoping that I get to update this map often and that soon, whether it be Christopher Borthwick from May I Have Your Attention, Please? or Jane from First Week of Jane or Bob and Betty from Boxes, that they all come alive on a stage somewhere  to spread the message again to new audiences in new places. 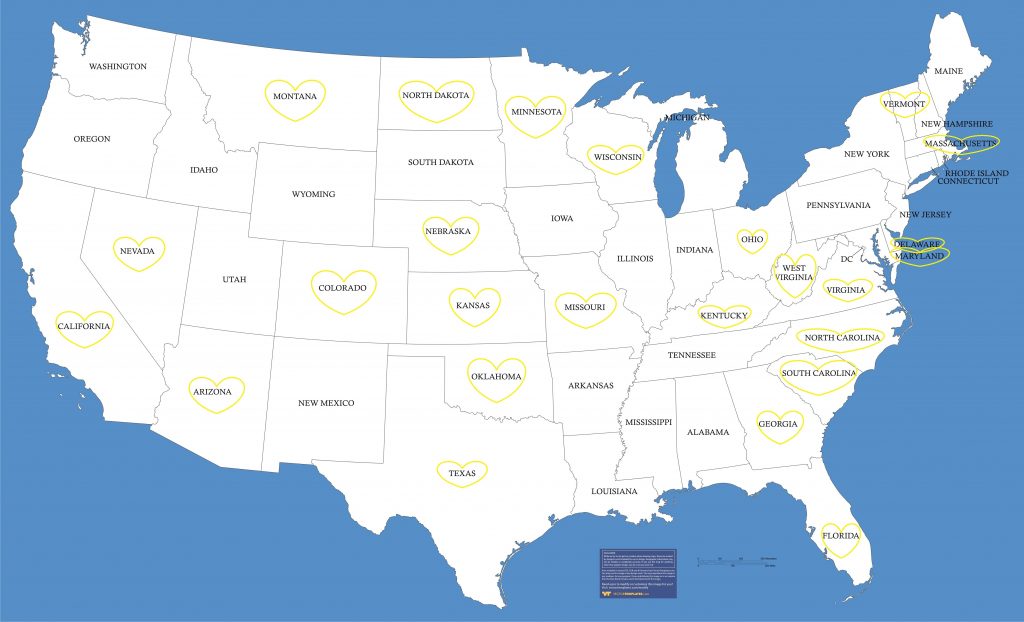 Not often are you able to turn back time and see yourself from an outer perspective. In some ways, much of being afforded this opportunity seems surreal. I recently found a VHS tape (not like Charlie in May I Have) but a tape of me and my best friend, Mary Ann singing music in our early 20’s and yes, I did say in our early 20’s NOT in the 1920’s 😉  Much has changed as I look at the video from this outsider’s perspective yet one thing is very recognizable…I was a writer. It was songs then but still they were my creations. So if you feel so inclined, take a reminiscent journey back with me in a very rare glimpse of the early writer in me.

With most plays, we practice, we take the stage and sometimes we get the standing ovation or a job well done remarks or an award,  but seldom do we expect that because we performed, a person chose to live. That is powerful and that is what happened in Nebraska. We may never know how many others may have chosen life because of seeing May I Have Your Attention, Please? but saving one life gives us hope that each performance may have impacted another person to give life a chance. To all who choose this play and its message, I salute you!  #Theatre4Change 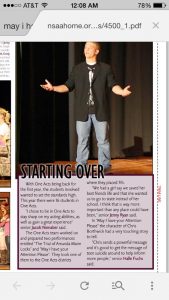 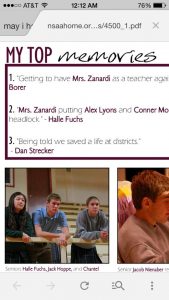 #2016KTA Bracken County High School’s performance of May I have Your Attention, Please? was more than just a performance to advance them to State Competition in Kentucky. They used their performances to spread awareness by using the performance as a catalyst to start dialogues. They brought in speakers at the various school and community performances they did and handed out these bracelets with the Teen Suicide Hotline number on the inside. Congratulations, Bracken High School for being a real #Theatre4Change! 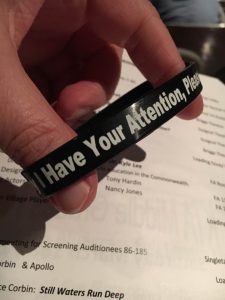 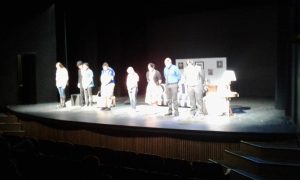 Daniels asserted the play was a “hard topic, challenging, gripping and engaging” with a “fabulously strong acting with firm, clear commitment.”

Niagara students take to the stage

The festival is featuring 12 productions from around Niagara. This year three productions will move on to the regional competition in Chatham.

The opening of this year’s festival was South Lincoln High School’s production of Coming Home by Meredith Short. Minimal set pieces created an open feel as the major set pieces created a bridge and sand pit. The ensemble cast led by narrator Emily Sutherland explored the process of growing up.

The closing show for the evening was Fort Erie’s second show, May I Have Your Attention Please? Daniels asserted the play was a “hard topic, challenging, gripping and engaging” with a “fabulously strong acting with firm, clear commitment.”

It was a humorous look at a contemporary family as they lounge in the family room on a Friday night. The typical older brother, younger sister, mom and dad have guests over while waiting for the middle brother to come home. Frequently late, rarely dependable, the “Jim Carey” of the family sends a DVD instead, the only way to get everybody’s attention.

While the show starts with clever humour, it becomes apparent that all is not well. Tyler Barron, Sarah Ward and Brent Gorrie shone with sharp delivery and convincing character.

“The show had fabulous use of the props and I love that you used live TV,” commented Daniels. “Look for the signs” of teen depression comments one character as he summed up the theme of the play.

What an honor the day before my birthday to see that the message of May I Have Your Attention, Please? is being shared in such wonderful ways. I applaud the efforts of this High School!  #Theatre4Change

Drama is coming to Cross Creek, and, it’s the good kind.

New teacher and drama director Mr. D.L Barksdale is a former New Yorker who has a history in cinema. Barksdale is bringing a fresh breath of theatre that the school has never seen before, and he plans to do it soon. “May I have your attention, please?” is a one act play written by Catherine Rhoden-Goguen that the drama department performed in Milledgeville, Georgia during the regional acting competition back in October.

The play is centered around Chris, a high school student who feels as if he gets no love from his family, and is the black sheep. He tries to talk to them about how he feels, but is it too late for them to save him when he has already contemplated taking his life?

Cross Creek student and uprising actor Christian Thomas won the All Star Cast award for his portrayal of Brent. Barksdale felt as if this play was the best choice for students and teachers alike because it discusses a topic considered taboo in high school: teenage suicide.

Unknown to students, teachers went to a training seminar based on suicide prevention, and Barksdale felt as if “this was the best way to continue the conversation among the teachers, and leave room for conversations to be initiated by the students.”

The play will be debuting on November 17th, and will be accompanied by poetry, music, and other forms of art that could prevent teenage suicide, in hopes of not only extending a helping hand, but making it go much further than a one act play.

I’ve always been fascinated by the lives of others and the events that shape their character and actions. In particular, Grace Moore was a famous opera singer who grew up in the city I was born in, Jellico, TN. Her ability to come from a small town and achieve worldwide fame was inspirational to me as a young writer. Her life inspired me to write this play, More Grace. Find out more about Grace Moore

I’m not really funny by nature but on occasion I write a comedy. This first comedy was a KNPS (Kentucky New Play Series) winner and premiered at the Kentucky State Fair this year. The video clip is from, RE DO IT. Have you ever had a bad day, or had a situation that you wish you could have handled differently? Now you can – with the new cell phone app “RE DO IT! Enjoy Haleigh Rose Banks, Joshua Collins, Chloe McMurry, and Sadie Banks in the performance of the comedy play “RE DO IT” as part of Middlesborough Little Theatre’s 2016 scholarship fundraiser “An Evening of One-Acts”! (Video clip ©2016 Middlesborough Little Theatre. All Rights Reserved.) Thanks to Shawn Williams for the video. STAY TUNED TO 2017 FOR INFO ON PURCHASING PERFORMANCE RIGHTS for the full version of this ONE ACT.   #Theatre4Change