Retired Knox County teacher and current playwright Catherine Rhoden-Goguen, visited the classroom of one of her former drama student Corri Taylor to share her newest play, “Unstoppable by Design” with Taylor’s students.

Rhoden-Goguen contacted Taylor about putting together a cast of both students and teachers for her newest play.

“Unstoppable by Design” highlights the life of Matt Rifenburg, who had to overcome several obstacles in order to achieve success, something Taylor’s students said they related to. They not only met with Rhoden-Goguen, but also Matt Rifenburg.

During the visit students got to know Rifenburg and his story, the inspiration behind the play, and read through several scenes.

These students and teachers from Lynn Camp will be performing “Unstoppable by Design” on May 10th at Union College. 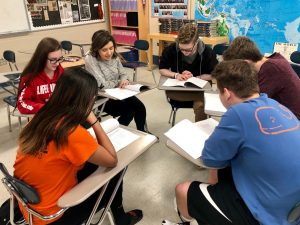 “Unstoppable by Design” highlights the life of Matt Rifenburg, who endures throughout a journey of life’s obstacles in pursuit to achieve success, despite the possibility of failure.

“Will his drive and perseverance be enough, or was his fate sealed with the first blow?”, as quoted from Rhoden-Goguen’s website.

“Unstoppable by Design” is not the only play she has written. Her first, “May I Have Your Attention, Please?” won the Critic’s Choice Award for the Wisconsin State One Act PlayFestival.

She even had the opportunity to discuss the writing process and inspiration for “Unstoppable by Design” on the podcast called: Strength to Be Human by Mark Antony Rossi.

“I want to write plays that engage the audience in thinking, questioning,” Rhoden-Goguen said, “And then with those results, I want them to go a step further and have my plays be a catalyst for action…even if that is just beginning a discussion about a difficult to talk about subject.”

Her plays have been performed at colleges, community theaters and on high school stages. She will continue to share her passion of drama with many others at Clark County Library in Winchester, Kentucky on St. Patrick’s Day. 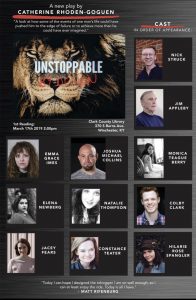 Her new play, “Unstoppable by Design,” will debut on Sunday, March 17, at 2:00 p.m. in the Clark County Library. Recently, Cathy took some time to pull back the curtain, exclusively for the Mountain Advocate, to discuss her inspiration, motivation, as well as her latest creation.

What are the first 3 words that come to mind when I say, “Who are you?”

Scorpio, persistent, creative… If the three words are connected though it would be “transparent Scorpio onion”

What was your seminal moment?

I think my moment was actually when I was a child, playing with my paper dolls which were torn out of catalogues my aunt Pauline would give me. That is when I first was a writer, even though I didn’t understand what it meant and I couldn’t write the words yet. It was still the thought process and creativity developing. It was very clear to me that I was unique in that way early on. And I had pretty elaborate plots and dramatic scenarios long before I went to school, just from my paper dolls.

Does it still inspire you?

Now that I have the skills to write, I don’t still find the need to play with the paper dolls though it might be a lot of fun. But I find myself still pulled more towards drama than comedy and there is usually a twist or two in my work.

A seminal moment specific to writing plays as an adult was when I was asked to start a drama program at Knox Central HS and there was no budget so I wrote a play tailored to the students in that class. May I Have Your Attention, Please? Was written and later published and performed all over the world. And sort of full circle is that Josh Collins was in that first drama class and now he is playing the lead character in my latest play.

Meeting Matt Rifenburg changed everything for me in many ways. Having been through the writing process of my latest play and capturing the story of a real person’s life has opened up so much fascination to me. As the saying goes, “truth is stranger than fiction” and this latest play has allowed me to see that firsthand. Being able to learn so much about a person’s life and to be entrusted to take that information and tell their story has been life changing to me. The randomness of how this latest play came to be has shown me that even at my age of 54, there are new motivations. I will never forget the writing of this play and I can’t wait to see how it is received at its first official reading March 17th.

There is a distinct, yet unusual, duality to your personality: the logos of education and the pathos of arts…

How do you explain that juxtaposition?

How do you make it work in your favor?

I was lucky to have a good balance of left brain/right brain and the education side of me helps for writing structure and the formality of writing but the arts side is the creative side that makes my story of love different than all the other stories of love other people will write. I definitely think they complement each other and growing up, my mom was the one always pushing me to do well academically and quizzing me in English but my Dad was my constant exposure to the arts and it made for a unique blend that has shaped me into what I am today.

How has your background shaped you?

My life has been a series of very unusual events. I have never had an ordinary life at any point. These events have been both extraordinarily good and bad but not the typical life events. Coping with these has certainly influenced and shaped me-again both good and bad. I’d probably be less, minus these experiences but sometimes I’d love to trade for normalcy just to see….

How does the community see you?

Are there any misconceptions?

I’m sure that there are misconceptions. One is that some people doubt those with mobility issues are capable of doing anything or we are turned into some kind of feel good project if we do anything at all. Still others perceive advocacy as being a troublemaker and artists as weird. Of course these are just that…misconceptions.

My eyes are up here lol…I’d love people to see me as a person and not as a person who uses a mobility scooter. I have the same feelings and aspirations as anyone else and I’m a go getter so have a conversation with me. People fascinate me and I don’t bite 😉

I’d love to start a community theatre or at least an acting group or writing group. There’s a lot of talent in this area that goes unnoticed sometimes or has limited exposure. I’d love to lead a group to collectively showcase more of this talent on a larger stage.

What is your comment on our culture? (shared through work)

I try very hard in my writing to keep characters real and that usually means giving them both good and bad characteristics. People often do wrong things but not because they are all bad but because they feel trapped or afraid etc. I don’t want to tell people what to think so I try to present the characters and let each person draw their own conclusions based on their own experiences and thoughts. People are told what to think too often. I don’t want to add to that problem.

What does your work aim to say?

What are your themes?

#Theatre4Change is what is in my mind whenever I entertain a new play idea. I want to write plays that engage the audience in thinking, questioning and then with those results, I want them to go a step further and have my plays be a catalyst for action…even if that is just beginning a discussion about a difficult to talk about subject. The typical play for me addresses some social awareness issue. I have addressed such issues as suicide, Alzheimer’s, effects of technology and social media on our lives, drug addiction and incarceration, domestic violence, inclusion and the list goes on and on…

What is your process?

My process begins when the idea comes to me. It can sometimes be a random thing such as a typo. Two plays have resulted from that type beginning. First Week of Jane was the result of seeing a typo on Facebook that should have said First week of June but the typo caught my attention and once I had the title, the rest was just filling in the blanks. Similarly, Gorilla Girl resulted from a typo of a text that should have said, good morning gorgeous, but was autocorrected to “good morning, gorilla”

So once the idea comes, then I pre write in my mind. All I need is the structure of: this is where I’m starting and this is what I want to convey and it’s like a puzzle from there.

In my latest play the process was a bit different and came about from seeing an article on Quora which was about a guy who dropped out of high school. This spoke to the teacher side of me that I still have intrinsically and from that interest, the rest of the play held so much more as I kept digging.

When do you know it’s complete?

Like a puzzle, you just know when that last piece fits and the puzzle is complete.

Something that has stuck with me from my latest work is, “Everyone wants to be a lion until it’s time to hunt.” I find this applies to many things and not just writing but specifically to young writers I would say it means to you that everyone wants the novel, the play on Broadway…the finished product. That is the metaphorical “lion” but not as many want to be a lion when it’s time to write the 15th draft, or format a script or do all the “stuff” that isn’t as glamorous. You can’t be a lion without doing the hunt which is the blood, sweat and tears of what makes a lion so magnificent. I think keeping this in mind will serve you well in life no matter what career path you take.

The Rye Whiskey Review has published, Leap Week. Check it out here.

Kentucky Playwrights Workshop presents readings of three one-act plays, each running about 30 minutes in length. Discussions will follow.
The authors are local playwright Bill McCann, Jr. whose Southern Gothic explores whether or not an elderly man suffering from
dementia can help solve a decades-old murder mystery. Lexington playwright Michael McCord‘s Dinner at Zuck’s is a comedy about a young man’s meal with Facebook founder Mark Zuckerberg.
Barbourville playwright Catherine Rhoden-Goguen‘s play
Unstoppable by Design explores the gut punches Matt
endures on his quest for success despite the probability of failure. Will his drive and perseverance be enough, or was his fate sealed with the first blow?
Kentucky Playwrights Workshop is a 501(c)3 public charity that encourages development of new stage works. In addition to this
afternoon of readings others are being developed for other regions and cities across the state; six are planned for 2019. Follow KPW’s Facebook page (https://www.facebook.com/Kentucky-Playwrights-Workshop-Inc-170206223071576/?fref=ts) or visit their website (http://www.kyplayswork.org/) for more information and for updates.