Click Here to see May I Have Your Attention, Please?

Playwright Cat Rhoden- Goguen and subject of her new play, Unstoppable By Design, Matt Rifenburg joined Mark Antony Rossi to discuss the unique process for writing this inspiring play on the podcast: Strength To Be Human.

Stage Directions will be read by Constance Elizabeth Teater

Video of adjournment of House of Representatives 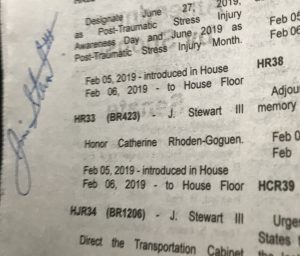 FOR IMMEDIATE RELEASE Local playwright and teacher to be honored by Kentucky House of Representatives For more information: Cathy Rhoden-Goguen: 606 344-0491 Rep Jim Stewart: 606 627-1072 Cathy Rhoden-Goguen, a retired teacher and active playwright, will be honored by the Kentucky House of Representatives on Thursday February 7th in Frankfort. According to Rep Jim Stewart, III, (86- R) the House will honor Ms. Rhoden-Goguen by adjourning in her honor on that day. “Ms Rhoden-Goguen will be on the floor of the House, the Clerk will read the citation in full and then the House will then stand adjourned in her honor. According to Representative Stewart, “We adjourn in honor of people and teams a great deal. When a team wins a state or national championship, or a couple reach a milestone–a 50th anniversery, for example–or a person celebrates a milestone birthday or career achievements we in the House honor them by adjourning in their honor. Still there are only 30 opportunities this session and 60 next year; it can be hard to get every deserving person recognized. It is always an honor to me when I can submit such a citation on behalf of deserving constituents such as Ms. Rhoden-Goguen. The citation offered by Rep. Stewart reads as follows: Whereas Catherine Rhoden-Goguen is a retired teacher who taught for 28 years and Whereas she is a National Board Certified Teacher, and Whereas Ms. Rhoden-Goguen was an outstanding teacher of drama at Knox Central High School as recognized by her peers and students and the Eastern Kentucky Dramatic Arts Society (EKDAS) with its first Lifetime Achievement Award, and Whereas she has been recognized as an outstanding playwright whose plays have won awards from the Kentucky Theatre Association: her full-length play Boxes, co-written with J. Michael Radford, was runner-up in KTA’s Roots of the Bluegrass New Play Contest in 2015 and in 2016 her 10-minute play RE DO IT won the organization’s 10-minute play contest, and Whereas Ms. Rhoden-Goguen’s play “May I Have Your Attention, Please?,” published in 2003 by Pioneer Drama, has received productions across the United States and Canada, Great Britain and Scotland and has won awards including the prestigious Critics Choice Award at the Wisconsin State Theatre Festival and Whereas she has had two plays published by Brooklyn Publishers, Cedar Rapids, Iowa: Looking for Mr. Right and The Most Human, and Whereas Ms. Rhoden-Goguen is to present the Kentucky Playwrights Lecture at Union College on May 10, 2019, and Whereas Ms. Rhoden-Goguen is a member of the Kentucky Theatre Association Board and Whereas Ms. Rhoden-Goguen will present her latest play, Unstoppable By Design: Story of Matt Rifenburg at its first reading in Clark County, March 17, 2019. Therefore the Kentucky House of Representatives does adjourn February 7, 2019  in honor of Catherine Rhoden-Goguen. 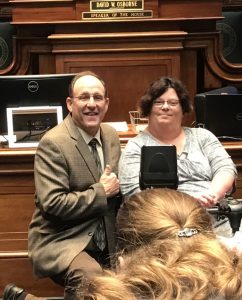